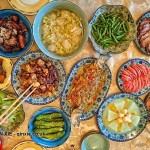 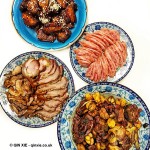 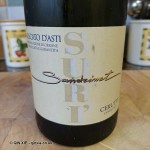 Food, drink and travel writer Qin Xie explains what the Chinese drink with the most important feast of the year and what goes down well in her own family.

Like Christmas, missing the familial gatherings during this fifteen-day festival is, in a word, unthinkable. That’s why each year, millions of Chinese battle the impossible crowds to return for that reunion.

Typically, a feast on New Year’s Eve is a table loaded with dishes and surrounded by multiple generations. It will start at lunch, which might be lighter, with a break for snacks, tea and games like mahjong or cards, before continuing onto dinner. Several members of the family will have invaded the kitchen at some point to lend a hand or to create their signature dishes.

Published on Life in Luxury on 10th February 2013: I often wonder if my room, with its heavily laden shelves of cookery books, is just another word for the library. My collection mostly involve chefs, restaurants or French cuisine; a sure sign of the food I like to cook, or at least look at.

When it comes to Chinese cookery books, things get a little more complicated.

Sure, there are a number of Chinese-themed books on the market with TV or celebrity tie ins but a quick browse through a few of my local bookshops revealed a very narrow selection with serious recipes.

With that in mind, I’ve chosen a few Chinese cookery books currently on sale online or in bookshops that will stand the test of time and offer ideas for years to come. There’s probably nothing more perfect than jiaozi for a Chinese New Year celebration – it’s the sort of dish that families make together and enjoy together.

The pastry is made with just water and flour while the filling can be almost anything you want. Most fillings are meat based and vary from region to region, like pork and garlic chives or beef and celery.

Here’s a recipe for pork and Chinese leaf dumplings:

Published on BespokeRSVP on 19th January 2012:

Billions of people around the world will be welcoming in the Year of the Dragon in Chinese New Year celebrations this year on the 23rd of January. The celebrations can go on for as long as 15 days, with different traditions followed each day, or can be as small as a family gathering on New Year’s Eve.

In my family the celebrations have always involved copious amounts of food, including dumplings and stir-fry (an amalgamation of our northern and southern China influences), and watching the CCTV (that’s China Central Television) New Year Gala.

Whatever the celebration though, it will always involve food – it’s just such an integral part of Chinese culture. So to celebrate a little on the Bespoke Blog, we decided to explore the Chinese New Year with Ken Hom OBE, one of the most internationally renouned personalities in Chinese cuisine.

Hom came to prominence in the UK when he was commissioned to do a TV series on Chinese cooking for the BBC in 1984. It was greatly received as it was the first time that food was cooked in real time and of course it was a very healthy and different way of cooking. The TV series was syndicated worldwide, with many more series and accompanying books produced since.

What do you think Chinese New Year is all about? It is all about celebrating with family and friends, especially over meals. It is also a time of family reunion and looking forward to the New Year.

Do you have any family traditions when celebrating Chinese New Year? I remember we cleaned our house before New Year’s Eve and talked about planning the family dinner.

Are there any dishes that are Chinese New Year essentials? Yes, dried oysters with sea moss…. Good things and prosperity. A whole fish for prosperity and dumplings for good luck.

How are you celebrating Chinese New Year this year? With friends in London

What’s your outlook for the year ahead and are there any new projects coming up? So far it looks good as I am filming a new series for television. I am supporting Action Against Hunger, and I will be supporting the Prostate Cancer Charity for the London Marathon. And who knows what else the year will bring?