Published on BespokeRSVP on 2nd July 2012:

The pop-up restaurant craze is truly ingenious, allowing us a little of what we fancy and (hopefully) leaving us wanting more. Here are the pop-ups for July that we think you would be a fool to miss:

A Piece On The Side

Former Petersham Nurseries chef, Eloise Schwerdt, is hosting a short series of pop up dinners at The Cuckoo Club. Running from the 4th to 7th of July, 8pm to 11pm, the set menu will include Heritage tomatoes with goats curd, zartar, purple basil and bruschetta, fillet of beef with roasted beetroots, baby carrots, domestica rocket, horseradish cream and salsa verde (vegetarian option is also available) and Baklava ice cream with pistachios and viola flowers. Visit The Cuckoo Club website for more information.

Fusion restaurant Asia de Cuba have always done things a little differently and during the month of July (4th – 25th to be exact), they are running a ceviche pop up in The Front Room of St Martins Lane Hotel. The ceviche menu will include dishes such as Scottish salmon and salted avocado helado; curry kingfish and passionfruit; grouper, Seville orange and Aji Amarillo; and prawn, snapper and ‘confit’ watermelon. Naturally, Asia de Cuba’s signature cocktails will also be available. Click here for details of location and contact.

Fish in the Sky

Platterform, winners of Young British Foodies’ Best Food Experience 2012, is collaborating with seafood restaurateurs Bonnie Gull of Bonnie & Wild to create a three week supper club called Bonnie-On-Sky. Hosted at Skyroom, London Bridge, the “immersive dining experience” will be all things fishy including dishes such as Isle of Lewis mussels steamed with Aspall cider and Cumbrian bacon. The supper club series will run from 5th July to 21st July, Wednesday to Saturday only. Bookings can be made here.

Street food comes in many outrageous forms but one of the most memorable is probably Mussel Men – boys (and girls) dressed in black and white horizontal stripes serving up some of the most amazing moules frites found outdoors. On the 14th of July, however, they are taking their wares indoors to Fabrica584 for a one day pop-up. Head down for a great feast or, if you’ll rise to the challenge, partake in their hourly “Mussel Men” press up challenge for a chance to win a free feed. Click here to book your ticket.

Jimmy’s Supper Club, run by Jimmy Garcia of The Wild Food Kitchen, will be hosting specially curated nights of feasting and entertainment from 20th July to mid August. Held at Annex East, a brand new 1800ft arts warehouse space situated less than 100 meters from the Olympic site in the heart of Stratford, the supper clubs are designed to showcase the best of British. Expect evenings of Dodgeball & Dinner, Sunday brunch, wine tasting, Film & Feast screenings, live music and DJ’s, fine art exhibitions and gallery shows and a custom designed cocktail bar. More details can be found here and tickets can be booked here.

Starting on the 21st July, Corrigan’s of Mayfair will be hosting wine matching lunches once a month with specially selected themes. The first lunch’s theme will be “The wines of Greece” to celebrate the Olympics’ journey from Athens to London. No matter the theme though, there will always be Champagne and canapés on arrival, four courses with matched wines, coffee and petit fours. More details can be found on the Corrigan’s website. To make a reservation for the Corrigan’s Wine Lunches, call 020 7499 9943 or email reservations@corrigansmayfair.com.

July begins with the second MAD symposium at Noma, the best restaurant in the world but, in London, it ends with IMAGINATION. From 27th July to 12th August, St Katharine Docks will be taken over by all things Danish from art and design to music and entertainment. And of course, there will be Danish food and drink stalls serving up a taste of Denmark. Details are yet to be finalised but Visit Denmark has all of the latest details. 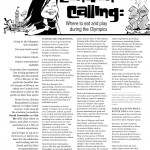 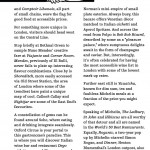